I know this wasn't on my "to-review" list in my last post, but I had a lot of things to talk about, which usually doesn't happen. Usually, it's just "I liked it.", which becomes obvious in the vlog I did with Skylar. 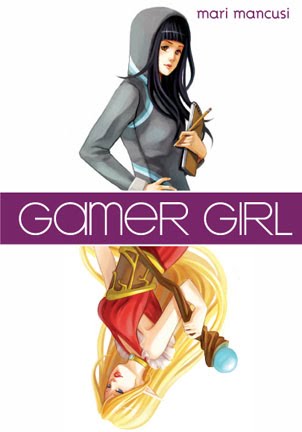 Gamer Girl isn't my typical read. Usually, I'm all for futuristic, dystopian, apocalyptic... that sorta thing. But this was fun-- a nice break from all the traumatizing plot twists and villains. It was cute, light, and easy. And since I play a lot of RPG and MMORPG games I was pretty pumped to read it. (it also became clear that the author had played various games before by using words like "noob" and "tank")


After Maddy's parents divorce, she's stuck starting over at a new high school. Friendless and nicknamed Freak Girl, Manga-loving artist Maddy finds refuge in the interactive online game Fields of Fantasy. In that virtual world, she reinvents herself as Allora, a gorgeous elfin alter ego, and meets a true friend in Sir Leo. Maddy can't hide behind Allora forever, especially as a real-life crush begins edging in on her budding virtual romance. But would anyone pick the real Maddy, gamer girl and Manga freak, over the fantasy? This fresh, geeky/cool novel includes online chats and exciting gaming, and features Maddy's Mangastyle artwork.

It had a lot of clichés--the simple fact that Maddy has a secret identity immediately shows similarities to tons of books and movies.

Some were good, some were tolerable, some were annoying. None of them were fantastic. Maddy was realistic, which is something I love to see in characters, different species or not, and she was relatable.

The love interest was, in a word, adorable. He was shy. He was awkward. And when faced with the problem of figuring out Sir Leo's real identity-- well, I'll give you a hint of how predictable this book's "plot twists" were--I knew who he was gonna be within the first chapter.

Things That Were Cringe-Worthy:

One thing comes to mind. THE SPEACH. Certain ways of saying things are better left in-game. Please, please leave them there. In some places, it got really corny-- to the point where I winced in actual pain.

I'd only suggest this if you weren't into deep plots and complicated characters. If clichés don't bother you and you like cutesy romances, then, yeah, go ahead. You might love it!