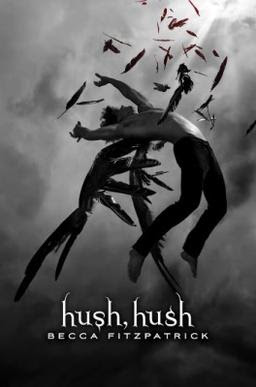 A SACRED OATH
A FALLEN ANGEL
A FORBIDDEN LOVE
Romance was not part of Nora Grey's plan. She's never been particularly attracted to the boys at her school, no matter how hard her best friend, Vee, pushes them at her. Not until Patch comes along. With his easy smile and eyes that seem to see inside her, Patch draws Nora to him against her better judgment.
But after a series of terrifying encounters, Nora's not sure whom to trust. Patch seems to be everywhere she is and seems to know more about her than her closest friends. She can't decide whether she should fall into his arms or run and hide. And when she tries to seek some answers, she finds herself near a truth that is way more unsettling than anything Patch makes her feel.
For she is right in the middle of an ancient battle between the immortal and those that have fallen - and, when it comes to choosing sides, the wrong choice will cost Nora her life.

I am completely aware that there are a ton of different opinions (both negative and positive) about this book and by sharing mine I will possibly be offending a lot of people. (Oops.) This is why I'm going to try to give a non-ranty (by this I mean no unreasonable venting) review while trying to say what I liked about the book.

Okay, so about Nora. Nora, in my opinion, was mediocre for a main character. She needed to stand up for herself more and take control of what was happening to her. I understand that it was difficult-- these are angels and Nephilim, after all-- but in all fairness the angels in this book were not the toughest angels. She also was guessing around to much. She was letting Patch get into her head and control her actions and her thoughts-- which is absolutely not good, in case you were wondering-- and never actually takes action to make him stop harassing her, sexually or otherwise. So, yeah. I thought she was pretty weak.

Her best friend, Vee, sucked at being a best friend. She was constantly shoving Nora into situations that made Nora uncomfortable, scared, or downright terrified. At first I sort of enjoyed her quirky loudness, but then it just got on my nerves as it became more and more obvious that Vee cared more about hanging out with hot guys than the safety of her best friend. I don't know about you, but if someone was harassing my best friend and making her feel threatened to the point that Nora was, I would get her as far away from them as I could. I wouldn't even want to share the same airspace as him, let alone push her to spend time with him.

Patch was a stalker. He followed her everywhere, made mental notes on her likes and dislikes, friends and possible boyfriends, etc. Harassing her and embarrassing her were just added bonuses. He tried to make literally every conversation have a sexual element, and he knew that made Nora uncomfortable.

Here are some examples:

"You smell good, too," said Patch"It’s called a shower." I was staring straight ahead. When he didn’t answer, I turned sideways. "Soap. Shampoo. Hot water.""Naked. I know the drill."

"Say 'provoking' again. Your mouth looks provocative when you do."

I understand that Patch was the villain. Because of this, he was actually one of my favorite characters in the book, because he made a very good villain. I just thought his reason for becoming a hero was shakey.

Nora's teacher was terrible. No teacher should force two students to be together in a class when one of them has already stated how uncomfortable the other has made her felt, unless he's secretly a shipper at heart. And when he said "no way," to Nora's request, she should have gone straight to the principal and continued to try and get Patch the heck away, not just submitted and gone to her next class.

But that's not even my biggest issue. My biggest issue are the angels. Now, in my opinion, angels are pretty powerful. And by pretty powerful, I mean a human could never stand a chance against one in battle, okay? Some angels are warriors, some are messengers, etc., etc, The warriors are called what they are for a reason. It bothered me that out of the two angels that became important, Patch was the only one that was described as powerful and there was actually supporting evidence that he was. I couldn't really get the angels in this book. Not only were they totally not pure at heart (not even the ones who weren't fallen), they couldn't kill Nora. Nora, who was not armed and was totally panicking, and just hiding while the angel (I forgot her name sorry) ransacked the room looking for her.

Two stars, because even though I didn't really enjoy this book, it managed to make me read it until the end. I was intrigued.

Also, quick tip if you haven't read it but want to: Read this book as though Patch is the villain, because until the nearing-end of this book, he absolutely is.
Posted by Unknown at 7:23 AM