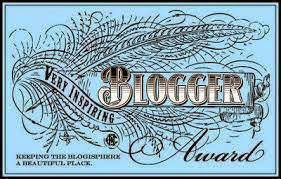 I was nominated by the lovely Skylar@Life of a Random. Thanks, Sky! You're the best. :)

Rules
1. Thank and link back to the amazing person(s) who nominated you.
2. List the rules and display the award.
3. Share seven facts about yourself.
4. Nominate some other amazing blogs and comment on their posts to let them know they have been nominated.

Okay, I dunno about you, but I've been listing too many facts about myself recently. I may be very inspiring, but I'm not very interesting.

1. I've been going through a stage where I listen to tons of k-pop.

The awesome thing is that k-pop is all the genres of music, just in Korean, with a couple English phrases here and there.

I happen to like listening to bad boy groups in k-pop, which basically means that they don't emotionally grab their faces or cup their faces with their hands or wear lots of pink. The starting group for my sister and I was BEAST. Or, y'know, B2ST. Their fans are called Beauties, which is cool whether or not you think so.

Also, Teen Top can dance, okay? Watch "Rocking". They can dance. So can BTS. And GOT7. Another awesome thing about k-pop: ALMOST ALL OF THEM CAN DANCE.

2. I can't catch a ball for the life of me (I'm terrified that I'll get hit in the face), or hardly throw any, but for some reason I'm fairly good at throwing a football. (the American kind, for those of who don't live here) This proves that not all traits are passed down from generation to generation, because my dad is good at every sport he tries. It's maddeningly unfair.

3. It takes at least two nights for me to adjust to a new bed. I've always been super jealous of my dad, who can practically fall asleep on command.

5. Apparently, I have a scary angry face. Which I take full advantage of. RUN, little children, RUN.

There. You can't say no to the Doctor.

7. I once told my sister that swag was for losers and guys with real swag didn't have swag, they had a sort of lean, and she hasn't stopped teasing me about that since. I regret that statement very, very much.

I feel bad because I do this every time but I literally know NO ONE in the blogosphere. Except, y'know, my sister, and she's the one that nominated me, so...

But I'd love to get to know you guys, so please join in if you want! Post the link in the comments and I'll read your post and comment on your overflowing awesome-ness.