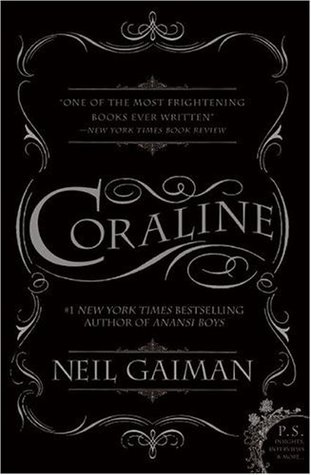 Coraline's often wondered what's behind the locked door in the drawing room. It reveals only a brick wall when she finally opens it, but when she tries again later, a passageway mysteriously appears. Coraline is surprised to find a flat decorated exactly like her own, but strangely different. And when she finds her "other" parents in this alternate world, they are much more interesting despite their creepy black button eyes. When they make it clear, however, that they want to make her theirs forever, Coraline begins a nightmarish game to rescue her real parents and three children imprisoned in a mirror. With only a bored-through stone and an aloof cat to help, Coraline confronts this harrowing task of escaping these monstrous creatures.

What inspired me to read a children's horror/fantasy book was a Tumblr post including GIFs from the movie. I hadn't even known there was a book (oops) but once I did I really wanted to read it before I found the movie online and watched it come to life.

But it wasn't only the GIFs that made me want to watch. It was this quote:


It was a story, I learned when people began to read it, that children experienced as an adventure, but which gave adults nightmares. It’s the strangest book I’ve written, it took the longest time to write, and it’s the book I’m proudest of.


So I found a PDF file of Coraline online (teehee) and got started.


CORALINE DISCOVERED THE DOOR a little while after they moved into the house.


It starts out as very many children's books do (brief description of where the MC is, his/her current situation, etc.), and the writing style is short and crisp. It's really easy to grasp, but it doesn't seem to lose anything (like detailed descriptions and whatnot). Through the simple descriptions and words the images seem to come alive even more, if you know what I mean.

But you know, from the first page, that this is going to be an "odd" book.

The book does have a bit more telling instead of showing but I really liked it. The way the author put things (rather bluntly) made the book humorous in some spots and quite scary in others.

Even things you think are insignificant tie together and end up meaning so much more.

It was brilliantly done and I would recommend this book to anyone, child or not.