On Writing: My Kingdom Come

This is just going to be a short post about one of my current projects. It's not going to go crazy in depth-- only the basic idea and most important characters.

If you've been around for... I don't know, a while, you know that fantasy is not my thing. I don't write it. I rarely read it. I write futuristic, sci-fi-y (that's a word), dark stuff. I write stories about angry ghosts and alien races and girls with guns. So, of course, the only logical thing for me to do was to sit down and start plotting a giant fantasy book. Go me. I'm very extremely psyched about it. Mainly because this is something that has been a part of my life for the past forever. I can't even remember when I started it. I was probably four or five, or even three. I've written (awful) versions of this story before. The idea of revamping it is, honestly, irresistible.

The story focuses on the lives of various people-- but, perhaps most vital to the story, are Princess Naomi and the High Princess Katherine. (Note that all of the names used are original and very extremely liable to change).

Princess Naomi is the heir to the kingdom of Fenn-- the only heir with a bloodline that goes back to the first ruler. The one with all the magic. This kingdom is known for its strategy, as brute force isn't possible with such few numbers. Engaged to wed the High Prince Matthew (name is also going to change) to solve the years of unrest between their kingdoms, Naomi travels to the other kingdom to meet him a month before the wedding. While there, she meets the High Princess Katherine (her name is 100% going to change), the daughter of the Blood King-- the man who sent the Aeron back to its home in hell. To him, she's invisible, a placeholder for the greater power her future suitor will bring. But there are many, many secrets an invisible princess can learn. Her father will learn to regret what he forced her to endure.

Roughly thirty years ago, there was a war that shook the world to its core. The Aeron had been in the world for years, corrupting and killing. The Blood King united the people and, since the Aeron is indestructible, used the last bit of magic in the world to lock the Aeron away, saving the world. He was immediately chosen to be the High King (which is the highest ranking you can ever have, ever). 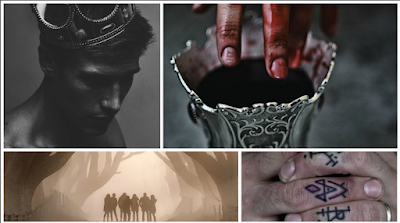 Now, even though it's been a short time, children roll their eyes when their parents or grandparents tell them to be careful of the demons.

Of course, the Aeron is nothing if not resourceful. Crossing dimensions are nothing. Just knock on the door. Someone's bound to open it.

A lot of this is still under serious editing. Serious, as in, I haven't even started writing yet. It's a huge thing to tackle-- especially since I want to make each of the three kingdoms as unique as possible, with their own customs, languages, etc. because that's what real countries are like. It's hard. I've been questioning my sanity on a daily, if not hourly, basis.

About the new blogging schedule: It's hardly anything, really. I'm going to be posting once a week, but I haven't picked a day yet. It's going to be either Sunday, Monday, or Tuesday. They'll be scheduled to post at around 9 AM. Again, nothing is set, but I'm working on it.

Email ThisBlogThis!Share to TwitterShare to FacebookShare to Pinterest
Labels: life, me, my kingdom come, on writing, wip