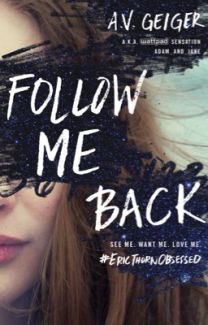 Tessa Hart has a secret - but she's too scared to tell a soul. She dropped out of school six months ago for reasons she doesn't dare speak aloud. Not to her mother. Not to her therapists. Not even to her brand new Twitter BFF...

Eric Thorn has a secret of his own - one that none of the girls would guess. He's dreamed his whole life of making it in the music industry, but no one seems to understand the harsh realities of fame. Not his manager. Not his record label. And certainly not the fan girl he starts talking to on Twitter late at night, for reasons he can't explain...

Now Tessa follows Eric, and Eric follows Tessa. But this is no fan-fiction come to life. This is a story of fan accounts and fake profiles, where no one is exactly who they seem, and where a simple tap of the "Follow" button has the power to lead to love... Or to something far more sinister.


Link to the book


Spoilers are between these: [  ] Highlight to read.

This was really good. It's not that often that I find an awesome book on Wattpad, either-- and this is the first draft. The unedited version. Which means it's going to get even better. *flails*

First of all, this is a mystery/thriller novel. It focuses on Tessa, a girl who dropped out of college in her freshman year due to reasons and is now terrified of being touched/watched/etc., and Eric... a celebrity in a downward spiral of paranoia after a fellow celebrity/popstar is murdered by a psychotic fan.

This is told sort of like Dangerous Girls-- you're given information from after everything happens, and then, in between these snippets of tantalizing clues of what the heck is actually going on, you get a few chapters filled with what happened a few weeks, hours, or months ago. It jumps around some, but that never felt like an issue as I was reading it.

May I add that I'm already kind of a scared person. Like, when I go out in public, I'm always checking where people are in the room/building in relation to me. I hate it when someone walks behind me. I hate it when people are paying a lot of attention to me. The curtains have to be shut at night. It's not like a phobia, but it's something that just makes me feel more nervous and anxious. This is the first book I've read that deals with stalkery, and may I just say it creeped me the heck out and made me want to nail boards over all the windows in the house.

When it comes to trusting people... HA. No such thing exists. You can't trust anyone. Not Tessa, not Eric, not any of the secondary characters, because EVERYONE is hiding something, everyone is a suspect, and everyone, at some point, seems like they're the one who is responsible for all the bad things ever. I felt so stressed while reading this, and it would be a severe understatement to say that I rushed. I did not simply rush. I did some amazingly epic Flash level of speed-reading that is deserving of a trophy and multiple pieces of chocolate.

The only things that I found iffy were A) the romance and B) some of the most important parts of the story happen in the POV of the character who wasn't there to witness it. For A, I liked the romance until nearing the end-- Eric was being a little bit of a prick. And he was jumping around with tactics. And it felt like he was being super inconsiderate. It was very out of character (to me). For B, I'm not sure if this was because the author didn't know how to write the intense scenes so she skipped to the other person, or if it's because she wants you to completely flip out with the lack of knowing happening. If it's the second, I salute her. I was so impatient to find out what happened that I think I sprained my thumb trying to scroll down the page at hyperspeed.

Follow Me Back ties very, extremely closely with the pressure a celebrity faces (and really makes being a celebrity seem horrible), as well as mental illnesses and how they affect a person.

There was a lot of "WHAT DO YOU MEAN"'s and "NOPE *throws phone" involved. Each of the police transcripts scattered throughout show a different part of the story. Parts that completely contradict each other at first glance but, after you read the whole story, make complete sense.

In conclusion: This was very tense and very twisty and I have ALL the theories and observations so someone needs to read this so I can talk to them about it.

Also: This book has ruined the name "Blair" for me. Like 100% RUINED. Apologies to any future Blair's I meet. You know who to blame.

Email ThisBlogThis!Share to TwitterShare to FacebookShare to Pinterest
Labels: a. v. geiger, book review, follow me back, wattpad