There were a few books that really stuck out to me when I was little. Not all of them were kid's books-- in fact, few were, and when I look back and re-read the synopsis and think about the plot I had memorized when I was little, I'm proud of the books I fell in love with. They weren't empty, or meaningless... They had depth.

My copy of this book is really old. The corner are torn and the pages are yellow. There's tape holding the spine together. I bought it at the library where I used to live-- they sold loads of books for 25 cents each (which was heaven)--so, yeah, it was already a little worn.

Kit never means to steal the bracelet; it is just a dumb mistake. But when she is caught Kit is sentenced to twenty hours of volunteer work at the humane society. Kit knows how it feels to be stuck in a cage like those animals and soon she begins to learn that the key to her own cage is right in front of her.

The ending nearly brought me to tears. I wanted Kit to make it in whatever she tried so bad because I felt like she deserved it. She was angry... wanting to prove something when she stole the bracelet. And she instantly regrets it. Her step-dad is an alcoholic jerk, and her mom is spineless. Even though she loves Kit, she would never stand up for her when her step-dad was being cruel.

I wanted Kit to make it, but I didn't always agree with what she did. Lie upon lie upon lie was told-- no one ever knew the whole story until the very end-- not even her best friend. But Kit pulled through, and became a better person.

This second one I was absolutely obsessed with-- and the book holds the marks to prove it. Tape on the spine, worn cover, yellow, stained pages, and pages that aren't even glued to the spine anymore.

Joelle hates her new filly...
Joelle has a very special relationship with her Thoroughbred mare, Dance Away. Then Dancer dies giving birth to her first foal, and Joelle swears that no horse, not even Dancer's filly, will ever replace Dancer in her heart. But Joelle's parents insist she take care if the orphaned filly--it needs her help to survive.
Joelle does as little as she can to groom and train the foal. All she can think about is Dancer--that they won't be riding together in the big fall show where Joelle was sure they'd win a trophy. Joelle's convinced that Dancer's filly will never be a winner like her mother.
Then something happens that will make Joelle change her mind forever...
I couldn't find a picture of the same version I had, so I took my own. 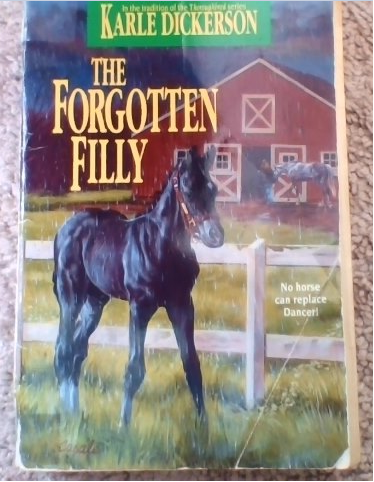 I read this one so many times that I wrote a paper on it-- complete with exact quotes and character development-- without even glancing inside of it during writing. And it was graded an A. Again, Joelle makes a lot of mistakes; everyone does, so it's only realistic. She hates the filly because she believes she caused her beloved mare's death. Of course, it's not really the foal's fault, but Joelle misses her horse so much that she doesn't care. She becomes more distant, more angry. The ending left me breathless and pumped up.

I skimmed both books while writing this, just to try to see if I loved them as much as I did back then. It's both yes and no. No, both books could use some editing-- in completely different areas. Yes, they still have that awesome message, and, of course, they hold a special place in my heart. These books inspired me.